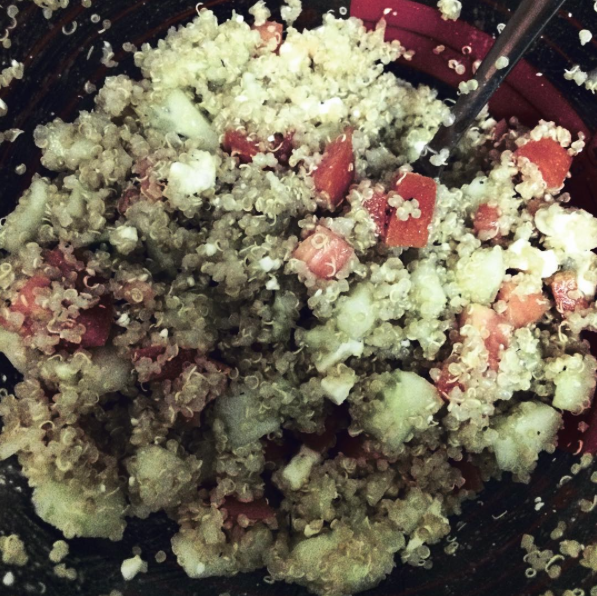 It's been quite some time since I posted some spinster food. I will admit that this is not an original recipe. Before we go any further, here's the link. I, of course, found this on Pinterest, but the recipe is here on AllRecipes.com Of course, my photos is a little spooky since tomorrow's Halloween, but if you want to know what the recipe will really look like, then just visit AllRecipes.

Now, a little background. When I went to do the Art in the House craft show, I was in the same room as the kitchen, and in the kitchen was one Reverend Josie Holler who makes all sorts of delicious concoctions. I bought a pint of her quinoa salad, and I loved it so much I ate it for breakfast the next day. The thing is, though, I don't live near Rev. Holler, so I had to do my own research and make my own quinoa salad once I got back to Atlanta.

This recipe is fairly close. Of course, I'm not a masterful cook like the Reverend Holler, so it's not quite as fancy. However, if you add a little parsley and don't peel your cucumber like I did, you may get it even closer. I will say I changed a few things:

1. I probably added a bit less dill than the recipe called for. I just don't like dill that much.
2. I couldn't find a small cucumber, so I think I used a medium one, and I think I could have used half of it instead of the whole thing.
3. I eyeballed the feta cheese because I thought the recipe maybe was a little disproportionate.

I think it turned out delicious, but I bet it's great with whatever customizations you could think of. I just wanted to share the recipe and the idea. I'm excited I have an exciting little quinoa salad waiting for me come lunch time. Well...and then lunch again tomorrow.

Happy Friday!
Posted by Myrna Minx at 8:48 AM