My First Mensa Event...and Some Lipstick 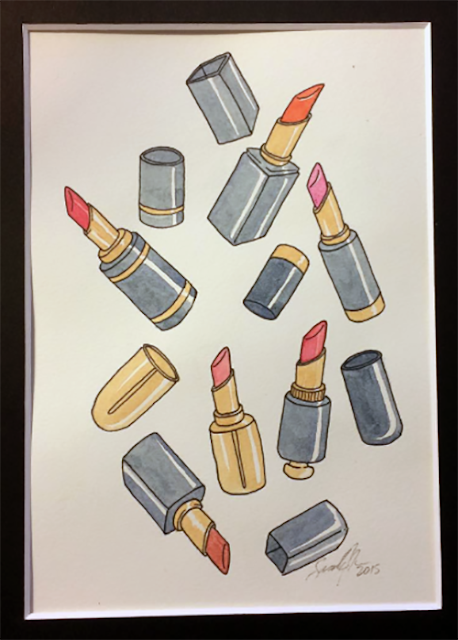 So, today's illustration is one that I'm working on for my Indie Craft Experience Table (It's next weekend!). This will be available matted and framed. Very exciting. Of course, if you follow my Instagram, you've already seen this, but since I've been pouring all my illustrating efforts into this ICE table, I'm afraid it'll have to do until the show's over.

Speaking of Instagram, if you follow my Instagram, you know I recently joined Mensa. Part of me feels like I got away with something and shouldn't really have been accepted, but the other part of me thinks that I shouldn't look a gift horse in the mouth. So, I'm going with it.

Mensa has these groups called SIGs (Similar Interest Groups) that are based on a wide variety of different hobbies, passions, or occupations. So, I looked on the Mensa website and chose a SIG I thought I might enjoy. Essentially it's a book club where there's no assigned reading. Instead, people come and talk about what they've been reading, and there's sort of a discussion about the topics within as well as book recommendations.

The meeting was OTP (Outside the perimeter of 285 in Atlanta speak), and I had no idea what to expect. I knew they were having soup, and I had offered to bring bread, so I showed up with my two loaves and knocked on the red door of this unfamiliar home.

Inside, the house smelled delicious. In the dining room, there was an array of crackers, cheese, fruit, and sweets, and on a sideboard were several crock pots, plugged in and warming. One of my hosts introduced me to his vintage bread slicer (much like this one) that had an off-center square at one end so I could rotate it to choose the thickness of my slices. I'd never seen such a thing, and apparently neither had many of the other guests as bread slicing then became a conversation piece. I mean, why didn't I know bread slicers existed?

After trying the soups and munching upon other refreshments, we settled into the sofas to discuss books. Each guest would hold up a book and tell a basic synopsis (without any spoilers) and tell whether they liked the book or not. There was some brief discussion, and then the book was passed around while the next person talked about their book.

Some of the selections were the sorts of things you'd expect - an autobiography of Stephen Hawking, Simon Singh's The Code Book - but there was also lighter fare like John Grisham's Skipping Christmas, and Bill Bryson's A Walk in the Woods. During the discussion of A Walk in the Woods, I discovered that many of the book SIG's attendees had hiked some or much of the Appalachian Trail.