Spinstergram: The Table Next To My Sofa 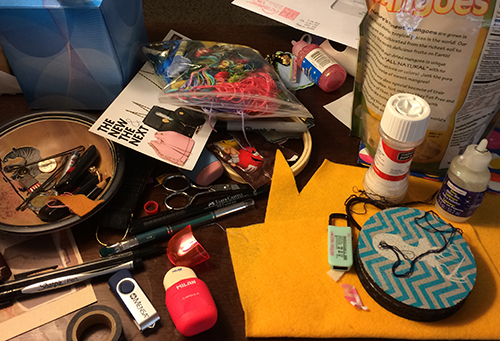 I watched a documentary once about Stanley Kubrick and his creative process. His archives included boxes and boxes of photos of seemingly meaningless things. They were research for set design, and one of the things that most interested him were people's bedside tables and their contents. This morning, while eating my breakfast, I looked over at the table by my sofa and wondered what Kubrick would have to say about it.

My mom gave me this table when I lived in New York. It has sides that can fold out to make a table at which two could eat - maybe four if you were careful. I had a boyfriend in New York who put a dish of hot food on the table without a trivet, so now it has a white spot. Then, there's another spot because even when I use a coaster, somehow water gets on the table. So, it's a good table, but because of my slovenliness, it's not in mint condition.

Now, let's talk about what Kubrick was looking for. Here's an itemization of the things on the table:

- Two flash drives
- Two Eraser/Pencil Sharpener combos
- One promotional postcard
- Four pens (one brush pen, one glitter pen, one sharpie pen, one micron pen (out of frame))
- One dish containing the following:
- 2 extra large bobbi pins
- One broken flash drive
- One laser pointer
- One ring
- One in tact flash drive
- One pencil stub
- some change
- a random scrap of felt
- One box of tissue
- One bag of dried mangoes
- One pair of tiny scissors
- Two bottles glitter glue
- One stack of coasters (three cork, one brass)
- One Mexican fan
- Misc. Mail
- A few random strings
- One ziplock bag of misc. embroidery thread
- One grinder of sea salt.
- One piece yellow felt, partially cut

This is what a spinster's table looks like. My bedside table, however, contains only one book, one magazine, a lamp, and a coaster. Go figure.