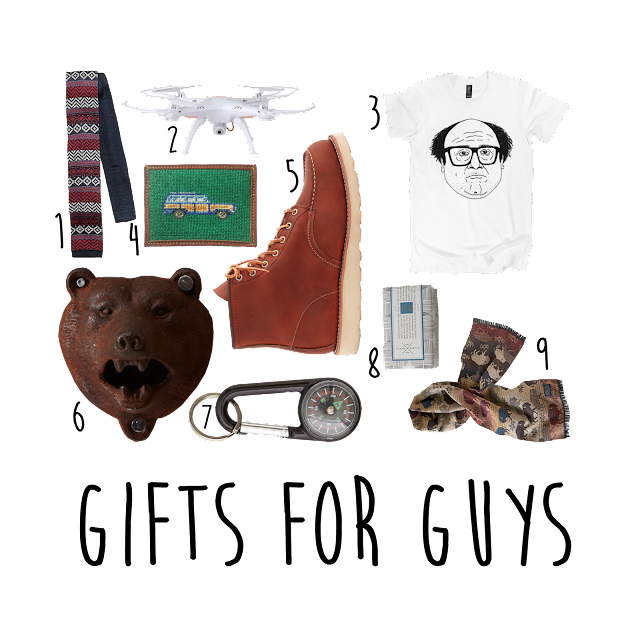 Most of the gift guides thus far have been female-focused. Of course they have. This is a spinster blog. How many men do you think I have to buy for? Well, the answer to that is exactly four. They're all relatives. As such, I don't exercise this muscle very often. Still, I think I found some pretty cool options. So, let's check them out!

1. Slim Fair Isle Tie: $65, Tommy Hilfiger
I'm sure lots of guys are sick of getting ties, but this one is a little different. It's special for the winter season, it's knitted, and it's skinny. So...it's kind of special.

2. Video Drone: $62.44, Amazon
Between this and the tie, I think this is the coolest gift at this price point. It looks like the video goes straight to the controller's iPhone, so imagine all the hijinks this could supply.

3. Devito Tee: $35, The Club of Odd Volumes
If there's a workout fiend on your list, I think a new and fun tee shirt is always an option. The more tees available, the less often they have to do laundry. Plus, the tees from The Club of Odd Volumes are lots of fun. I had a tough time choosing between this one, the one with Drake on it, and the one with Biggie. I recommend this website.

4. Grand Wagoner Needlepoint Card Wallet: $55, Tucker Blair
Tucker Blair has a bunch of cool needlepoint items that are highly giftable. While I think $55 is a little steep for a card wallet, I've made a needlepoint pillow before, and with the amount of hours it takes to make such a thing, I'm surprised it isn't priced at $550

6. Bear Bottle Opener: $19, West Elm
A mounted bottle opener is something cool for a bachelor's kitchen. Of course I'm a nondrinker, so unless I bought soda exclusively in the glass bottle, this might not get used much. But look how cute it is. Who cares if it gets used a lot?

7. Compass Keychain: $4.50, American Eagle
A carabiner is a handy thing for any keyring. I have one for when I get my car serviced so I'm not leaving them with my house keys in addition to my car keys. This one's just got a little extra pizzaz with the commas on one end. And, it's only $4.50, so it's perfect to tie in to a ribbon to finish off a gift or just to stuff in a stocking!

8. Cedar and Laurel Bar Soap: $6 (on special), West Elm
This soap. You guys. It smells so good. Finding a soap that's not super girly can sometimes be a difficulty. But alas! West Elm has this soap that smells of Laurel and Cedar. That's definitely not super ladylike. Yet, it smells so nice. I gave my mom some for her birthday, and she called me the other day to say that not only does this soap smell good when you use it, but it also makes the bathroom smell delightful when she's not using it. That, my friends, is a win-win.

9. Buffalo Scarf: $69.50, Pendleton
Scarves are, of course, a holiday gifting staple. That doesn't mean they have to always be the same plaid or fair isle designs. Try something that's both cozy and manly with this buffalo scarf from Pendleton. I like it.

Ok, now get to shopping! There are less than twenty days until Christmas. That may seem like a lot, but it's not. Happy shopping!
Labels: gift guide gift guides mens gift guide online shopping spinster shopping