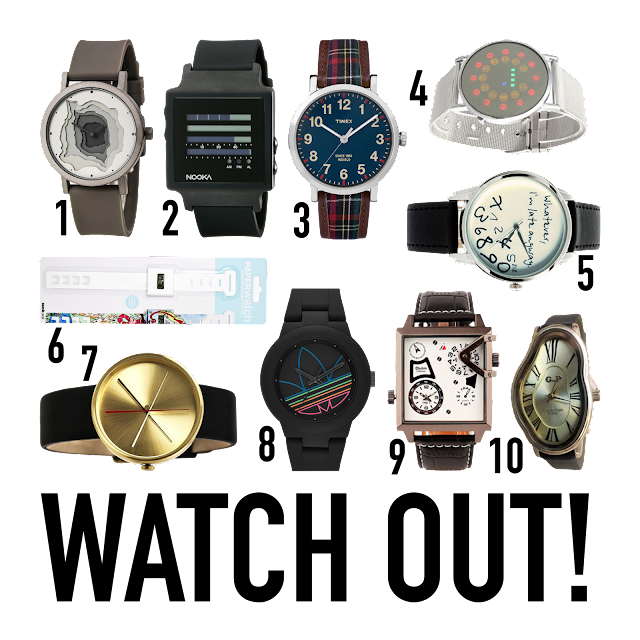 Thus far, the gift guides have been mostly for people of the female persuasion. However, spinsterhood doesn't mean a woman's life is totally devoid of men. Some of us have fathers, grandfathers, brothers, nephews, or brothers-in-law.

I won't go so far as to say that all of today's options are for men. IN fact, there are a couple I'm sure aren't for me. However, the majority could be given to some of the men on your list.

Now, I know you're thinking that watches except the Apple watch are pretty much obsolete. But, just because they aren't necessary anymore doesn't mean they can't be cool fashion statements or accessories, does it? I didn't think so.

So, let's link to some of these awesome timepieces.

1. Terra Watch: $145, Amazon
Is there a geologist on your list? I think this is a good one for them. It's like a topographical map.

2. Nooka Unisex Digital Display Watch: $79, Amazon
This is a cool, quirky watch that tells time in a different and creative way. Get it for someone who needs a conversation starter at parties. It also looks pretty slick.

3. Timex Original Tartan Watch: $60, Timex
For the prepster on your list. And you know what they say, Timexes take a licking and keep on ticking.

4. LED Light stainless steel wristwatch: $8.99, Amazon
Another watch that tells time creatively. Unlike #2 on this list, it's got a little bit of color as well. Plus, it's got that shiny woven band, too. Fancy! It's also only $8.99, so why not get it and stuff that stocking.

5. "Whatever, I'm Late Anyway," Watch: $9.99, Amazon
For your friend who is always late. This is a nice useful-yet-passive-aggressive gift. I'm betting they won't get the message, though.

6. Paper Watch: $14.99, Amazon
I think this watch is actually Tyvek and not paper, but I can't be sure. The idea is that you gift it to someone who will customize it and make it their own. It's great with sharpies, but you could also add a little sparkle with some E6000 and some rhinestones. I'm just sayin'.

7. Projects Crossover Watch: $140, Amazon
I think this is really aesthetically pleasing. Black, gold, minimal. This is a great example of watch-as-accessory. It's more like...a useful bracelet.

8. Adidas 'Aberdeen' Sports Watch: $85, Nordstrom
This watch comes in the rainbow version pictured here, but there's also a black and white version. I like how it manages to be chic and athletic all at once. I'd wear this one.

9. Russian Military Time Zones Watch: $21.64, Amazon
This watch is pretty cool. I have no idea if it's actually a Russian military watch or not, but it's great for someone who travels a lot or is often in contact with people in other time zones. Plus, it's under $25, so it's definitely in your budget!

10. Salvador Dali Watch: $44, Galis on Etsy
For the art history buff on your list. If you google "Salvador Dali" watch, there are actually a lot of results, so if you don't like this particular style or band, there are plenty more to choose from. Whichever one you choose, it's a cool idea and a quirky gift for that surrealism fan in your art.

Happy Thursday! I hope this list was a great time. Get it? See what I did there? You're welcome.
Posted by Myrna Minx at 7:00 AM