Recent Reads: Your Name Is Renee and China Rich Girlfriend 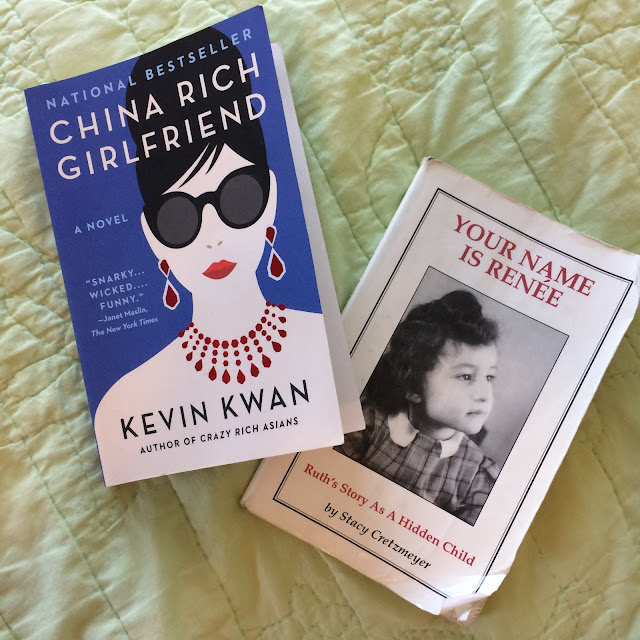 I go through a lot of audio books while I walk on the treadmill, but I also read a bit of a paperback every night before going to sleep. I'm not a particularly fast reader, and I don't read more than a chapter a night, so these two books took me probably a  month and a half. But, since I haven't written about either of these, I thought I'd post a couple tiny reviews today.

Kevin Kwan's China Rich Girlfriend
Before I started reading this book, I didn't realize it was actually the sequel to Crazy Rich Asians. It's a fast-paced, light summer read, and it's especially enjoyable for its descriptions of travel destinations and delicious foods. If you weren't able to travel abroad this summer, this book could have been a sort of mental substitute.
I must stress to you that this is a light read. It is not terribly intellectual, so if that's what you're looking for, I don't necessarily recommend this. Also, I think Kwan over uses the word "sumptuous" in this book. On the whole, though, I liked it.

Stacy Cretzmeyer's Your Name is Renee
I was in the walk in closet of my childhood bedroom a couple months ago and decided to have a look at some of the books. I vaguely remembered purchasing and reading Your Name Is Renee sometime around middle school. Something makes me think I bought it at one of those school book fairs.
I think this story is sort of a memoir, except that the author is not actually the person the story is about. So, I'm not really sure exactly where this book falls genre-wise. However, if you're at all interested in history or World War II, I think this is pretty interesting.
The story itself is told from the perspective of Ruth (AKA Renee), a young child during the Nazi occupation of France. She is not quite so hidden as Anne Frank was, and (spoiler alert) she actually lives through the war and eventually moved to the United States, married, and had a family of her own. That's not so much of a spoiler, though, since someone had to relay the story to Cretzmeyer years later.
The thing I enjoyed most about this book is a child's perspective on the kindness of the resistance as well as her time in a convent. It's a thin book, too, so it's a pretty quick read.

So, if either of these sounds good to you, then I say go for it! Happy Wednesday!
Labels: books kevin kwan reading summer reading