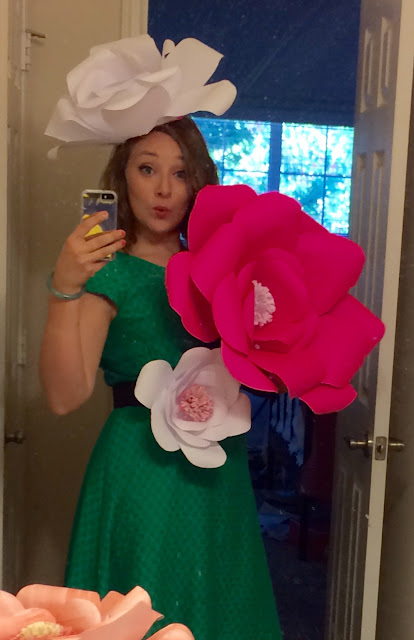 So, last night was my church's Trunk or Treat. I waited too long to take a photo, and it got dark, and I had already given away two of my giant flowers. Nonetheless, I had a friend take a photo so you could sort of get an idea. 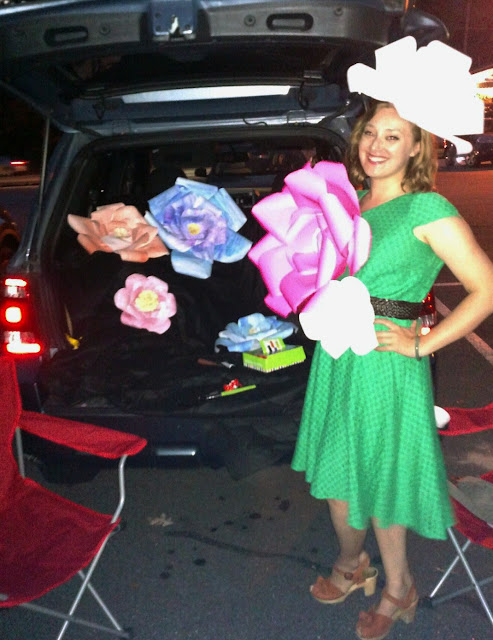 To get some different levels, I stuffed a dog bed I keep in my car under the black felt, so my "garden" wouldn't be flat. In the front, you'll see a box of bubbles that sort of ruined the composition, but the kids loved them.

If I hadn't been trying to do this trunk as cheaply as possible, I perhaps would have used green felt instead of black so that it would look more like a garden. However, I already had the black felt, so I used that.

I was also painting faces, so that's why the chairs are in front of my car.

I'm proud to say that aside from the candy, I spent less than $5 on my whole trunk-and-costume combo. The flowers were made of watercolored printer paper, for which I already had all the supplies. I already had the dress from a clothing swap, and the felt was from a show I did last year. I spent sixty-nine cents each on two pieces of neon pink cardboard for the big flower on my dress. The bubbles, face paint, and chairs were provided by the children's ministry at my church.

Side note: If you notice that my feet look weird in this photo, it's because my legs are crossed because I'm mid-fall in this photo. Ha. Of course.

1. The Head Piece:
I already had a metal headband, and I added an oval of of poster paper to it as a base to stabilize the flower. Then, I used packaging tape to attach the big white flower to the oval of poster board. Voila! My head piece!

2. The Flowers On My Dress:
I used big spring-loaded hair clips to attach these to my dress and just taped them onto the back of the flowers with packaging tape. That didn't hold super great, but it did last until I needed to take off the flowers.

3. Adding Bases to the Flowers:
The centers of the flowers are a little awkward to glue in place, especially if you're using white glue like I was. I'm not a huge fan of hot glue guns, and I already had white glue, so that's what I used. Toward the end of this craft project, I decided to add an X-Shaped piece of paper to the bottom of these. The center of the 'X' was large enough to  cover the bottom of the piece, and then the legs of the 'X', as it were, to the sides of the center piece. Once that was dry, I was able to just add the glue to the bottom, and stick it on. There you go. Much easier, and much more stable!

Ok, I'll be wearing this one again tonight because...well, it was basically free, and I think it's pretty cute if I do say so myself. Happy Saturday!
Posted by Myrna Minx at 8:48 AM