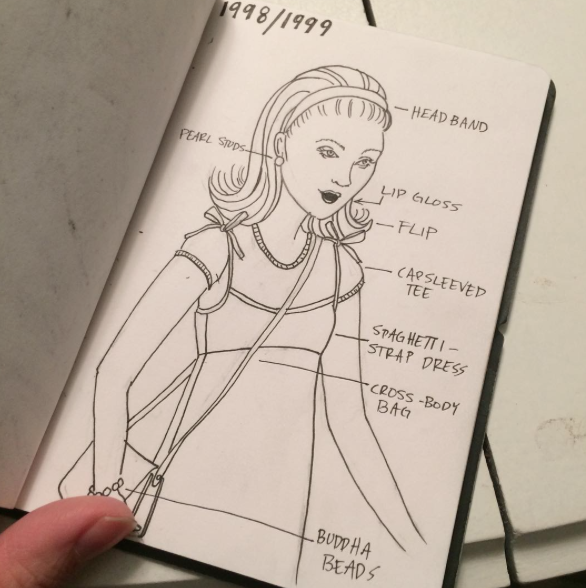 In keeping with the rest of the posts this week, I have yet another fashion doodle from the little sketchbook. Today's doodle is 100% an outfit I used to own in the late 90s. Let's talk about it.

Before I start in on the bullet points, I'd like to talk about how weird I know her face looks. The mouth, in particular, is weird because I drew it in pen. It was originally going to be a closed mouth, but then the bottom lip got out of hand, and I had to fill it in and it just spun out of control. So...just pretend she's about to say something.

Ok, now we can continue. Let's break this down into bullet points.

- Headband: I remember having a specific technique for headbands where in you had to place them straight into your hair instead of slicking the hair back. Very serious business.

- Pearl Studs:
I'm not sure if this was something specific to where I lived in South Carolina, but large pear studs were all the rage toward the end of high school. 98/99 was a time for more subdued pearl studs, so of course I wore those.

- Lip Gloss:
Oh, the lip gloss. I had clear lip gloss, vanilla lip gloss, lip gloss with glitter in it, and some that was sort of weird and frosted-looking. The glitter was the best one...obviously.

- The Flip:
I'm not sure how popular the flip hairdo was in other parts of the US, but we were very serious about it in my  hometown. We didn't tease it or anything like I would probably do now if I were going to wear it. We just used a curling iron to try to get the most perfect upturned-curl around the edges of our shoulder-length hair.

- Cap-Sleeved Tee:
I had a great number of these, and they were all rather fitted. My most favorite one was from The Limited

- Spaghetti-Strap Dress:
The cap sleeve tee/spaghetti strap dress combo was my go-to. I specifically remember having two such dresses from American Eagle: One Khaki and One Denim. I'd wear a white tee under the khaki one with a denim jacket (from The Gap, obviously) over top. With the denim one, I think I may have worn different colors, but I don't remember that one as well.

- Cross-Body Bag:
I still like a good cross body, but I remember having a very small one around this time. It had colored seed beads hanging from the bottom.

- Buddha Beads:
These were really popular. We all had them, but none of us knew what they really were. I've done a little research, and apparently they are "Mala" Bracelets used in both Buddhism and Hinduism. This bracelet is the construction we all had. Of course, we all hd lots of different colors, too.

What about you? Did you wear this? Do tell.